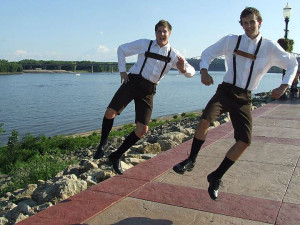 Dancers featured on the website of the UNI International Dance Theatre program.

The former director of the University of Northern Iowa International Dance Theatre (IDT) was “floating” thousands-of-dollars worth of checks to himself, according to a report from state auditor’s office. State Auditor Mary Mosiman says Daniel Wells, over a nearly nine year long period, took more than $15,000 out of a credit union account for the IDT.

“Most of this — $11,690 — were checks that Mr. Wells made out to himself from the Dance Theatre account,” Mosiman says. The report also identifies undeposited collections of $3,250.00 from ticket sales for various IDT performances and a payment for a performance at a Germanfest celebration. Mosiman says Wells did issue 42 checks to IDT from his personal account.

“Those totaled a little over $8,000 and he also used his personal account to pay for costumes for the Dance Theatre,” Mosiman says. “So, it appears that Mr. Wells was taking advantage of the time that it took for checks to clear to create temporary, short-term, interest-free loans to himself.” Wells left the university in February of 2014, when his contract was not renewed.

Copies of the report have been filed with the Board of Regents, the UNI Department of Public Safety, the Division of Criminal Investigation, the Black Hawk County Attorney’s Office, and the Iowa Attorney General’s Office.