You are here: Home / Education / Board of Education goes back and forth on school start date (Audio) 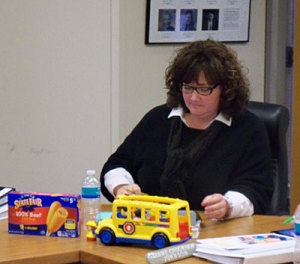 The State Board of Education discussed the school start date in their meeting Thursday in the wake of new guidelines issued by the Department of Education on how schools can qualify for a waiver to start school early. The issue has pitted those who say starting earlier is better for learning against those who say it hurts tourism events like the Iowa State Fair.

Board member Dianne Crookham-Johnson of Oskaloosa was critical of the timing of the December letter that indicated the department would no longer automatically grant waivers. She pulled a box of corn dogs and a small toy school bus out of a bag and put them on the table before speaking.

“How did we decide that in what appears to be behind closed doors with very few people — I’m not sure we’re even aware as board who’s making these decisions, we probably have guesses — there was a sudden rug jerked out from every district in the state of Iowa. Because we are more concerned about the State Fair, beer sales and hotel-motel sales tax revenue in this state, than we are about all of the kids going to school in Iowa,” Crookham-Johnson says.

Crookham-Johnson says the decisions on school calendars are discussed by everyone involved and approved by the school boards after hearings. “If our local citizens are that upset with school calendars right now, they can elect new board members. Local districts are very good at replacing school board members that they don’t like,” Crooks-Johnson says. “So we have a mechanism in place for districts to deal with immediate issues. No one is able to tell us what the emergency is for August and September of 2015.” 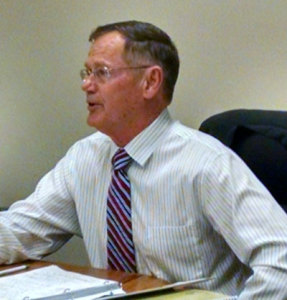 Board member Mike May is a retired teacher and a resort owner in Spirit Lake. He says the decision on start dates is up to the legislature. “The folks over there ought to consider all sides of this and when they make a decision they’ll bring it back to us, whatever that was, and we’ll write rules to implement it. That’s the way the process should work,” May says.

May then directly addressed Crookham-Johnson’s comments. “To me to suggest that Governor Branstad or Mike May or anyone who thinks we should enforce the state law now somehow doesn’t love kids or care about them or hasn’t spent their life — in my case 50 years — working for kids, I think that is totally unfair,” May says.

May says the governor has included over one billion dollars in his budget for allowable growth for schools. “Governor Branstad wants to do more than that, you know he does, but he has a budget that has to be balanced. One of the key industries in the state of Iowa is the tourism industry, is the travel industry. It’s an 8 billion dollar industry,” May says. “And what we’ve done over the past decade is to take two to three weeks of that summer session, which is most important to tourism, and we have pushed kids back into school.”

May says it would be like cutting out several weeks in the growing season for farmers and it ends up costing the state revenue that could be spent on schools. May says those who says starting early helps improve learning haven’t backed up their argument. “If I thought for one moment that starting school the 1st of September or the week in which if falls hurts kids, I would not be a proponent of it here today. I have never in this argument, Diane, seen any empirical evidence that spreading out the school year…or that ending school for the first semester at Christmas time improves student achievement,” May says. “Show it to me. Bring it to me. I’ve been asking the same question for ten years: Spread out the school year, make it longer and that will improve student achievement? Not a chance. There’s no empirical evidence to suggest that.”

Board of Education president Charles Edwards says he understands the concerns about how the decision to end automatic waivers was handled, but agrees that the issue is not one the board can decide. “We don’t have any standing here. I think it needs to be resolved by the legislature, by the governor. I believe it will. And I just hope that there is enough flexibility in whatever waivers and whatever the process is going forward that school districts still have some flexibility in setting their calendars,” Edwards says.

The discussion was generated in part by the Department of Education issuing guidelines for what will be accepted in granting waivers. Department director, Brad Buck, says that was a standard move. “The law is clear, The law indicates when school should start. It’s also clear in saying that in order to deviate from that and receive a waiver, there needs to be a demonstration of significant impact,” Buck says. “So, a very common practice of the Iowa Department of Education, when there is a waiver process, is to establish criteria for a waiver.”

Buck says there is no clear consensus in the state on the issue. “I would tell you it’s a mixed bag of reactions. I don’t know if you know this, but I have received a couple of emails on this, ” Buck told the board, to laughs. “It’s a mixed bag, this is probably a sort of representative demographic of how people feel about it.” Buck also pointed out that schools still can try to get approval to start early.

“The waiver still exists. If schools can demonstrate that there is a significant negative educational impact by not beginning when the law says, there is an opportunity to have the start date waived,” Buck says. There are bills in both houses of the legislature and the governor has indicated that he is willing to reach a compromise on the issue to come up with something that will benefit schools.

Audio:  Board meeting comments from Diane Crookham-Johnson and Mike May. 11:00