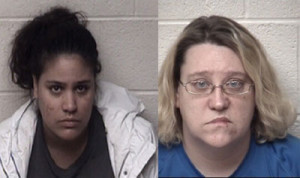 Charges have been filed in a church theft case that drew a lot of attention last month. A baby Jesus figurine was stolen from a nativity scene outside the Church of the Resurrection in Dubuque on December 26.

The church posted surveillance video online of the figurine being stolen and many people took to social media — angry that someone would steal a baby Jesus statue.

The figurine appeared back in its place a few days later. Police were able to identify the vehicle in the video and arrested 35-year-old Sarah Maus and 19-year-old Taiana Butler.

According to police, Maus admitted she was driving the car and Butler told investigators she and Maus decided to return the statue because of all the attention the case had received. They’re both charged with one count of fourth degree theft.