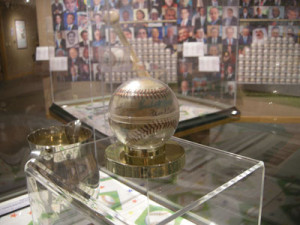 If you’re tired of winter, an exhibit about the “boys of summer” might warm your spirits. The only Iowan to be elected president was a tremendous baseball fan.

The Herbert Hoover Presidential Library and Museum is opening a new exhibit this weekend called “The Signature of Baseball.”

Curator Melanie Wier says they’ll display some of President Hoover’s extensive collection of baseball paraphernalia. Wier says, “We have a lot of his American and National League passes and different baseball game tickets and letter he wrote to players and coaches and all kinds of memorabilia.” Hoover’s private collection includes a baseball autographed by legendary player Babe Ruth.

The exhibit at the West Branch facility also features a remarkable collection of 181 baseballs, all signed by world leaders and prominent figures.

Those include Nelson Mandela, Margaret Thatcher and each president from Nixon to Obama. “They’re displayed so that you can see all of the different signatures,” Wier says. “There’s also labels that list out every person, what their title is and what country they’re from.”

Since Iowa is known as the home of the “Field of Dreams,” she says they’ve also devoted space in the exhibit to the single-A baseball team from Cedar Rapids. “We have a glimpse of Iowa baseball history through the Kernels,” Wier says. “We have a timeline of their history and then we featured six of their players.” The exhibit will open Saturday and runs through late March.