You are here: Home / News / Broadway production of ‘Kinky Boots’ makes one stop in Iowa (audio) 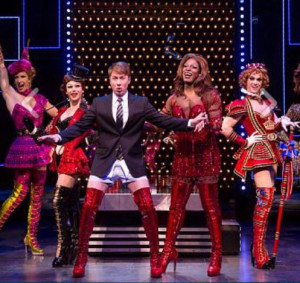 The nationally-touring Broadway production of the musical “Kinky Boots” is making only one stop in Iowa, opening tomorrow night in Des Moines.

One of the show’s stars is Steven Booth, who plays the role of Charley Price. “He’s reluctantly inherited his father’s shoe factory which is on the verge of bankruptcy,” Booth says. “In trying to live up to his father’s legacy and save his family business, he ends up finding inspiration in the form of Lola, a fabulous entertainer who’s in need of some sturdy stilettos.”

The catch is, Lola is a transvestite, which calls for some adjustments on the production line and in the minds of Charley and the rest of the factory’s crew.

“They’re a very unlikely pair but they end up finding out that they have a lot more in common than they ever dreamed possible,” Booth says. “They kind of end up saving the town. They discover that if you change your mind about someone, you can change your whole world, which is one of the great themes of the show.”

The story won six Tony Awards, including Best Musical and Best Score. The soundtrack was created by singer, actress and songwriter Cyndi Lauper, who first won fame in the early 1980s. Booth says he’s gotten to work closely with Lauper.

“She’s super hands-on and is really passionate about this show and about the musical theater business and she’s written some amazing music for it,” Booth says. “She’s as cool as you’d think she is.” Inspired by a true story, the musical is set in England.

Before the stage version, “Kinky Boots” was also a hit movie in 2005. The show runs Tuesday through Sunday at the Civic Center in Des Moines. For tickets, visit: www.desmoinesperformingarts.org.