You are here: Home / Sports / Hawkeye coach not sure if White will be ready to play Saturday 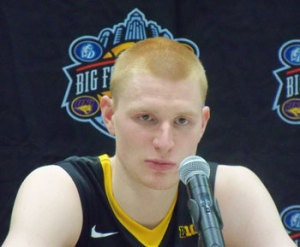 White suffered a shoulder “stinger” in Saturday’s loss at Purdue and sat out most of the game. “It’s gonna be painful, and hopefully it’s probably a function of what kid of grade it is, it looks like it was a pretty good one…so he’s going to have some discomfort throughout this entire week,” McCaffery says. He says it just depends on how much it improves so that he is not in too much pain to play.

It is an injury that is much more common in the sport of football. “Usually it’s a collar bone or separated shoulder when it’s a collision like that,” McCaffery says. He says nothing was broken or dislocated, it’s just very painful.

White will have the entire week to heal before the next game and has been seen by doctors and getting treatment and McCaffery says he won’t do anything until he gets reevaluated on Wednesday.

If White can’t go on Saturday McCaffery will have several different options. He says they can go small or go big and give more minutes to the two centers together who have been alternating their play.