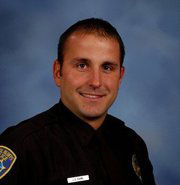 A southwest Iowa policeman will not face charges after shooting the driver of a stolen car last month as it nearly ran down the officer and his partner. Council Bluffs Police Officer Jarrod Poore fired two shots at the suspect, Jesse Wilkinson, as he sped past in the stolen Corvette on December 23rd.

Both shots hit Wilkinson, one in each leg. Pottawattamie County Attorney Matt Wilber says the case is now closed. “I’ve concluded that charges will not be filed against Officer Poore,” Wilber says. “From a criminal standpoint, his use of force was justified.”

Wilkinson fled the scene, abandoned the car in Omaha and was later treated for a gunshot wound. “Mr. Wilkinson admitted he had been using methamphetamine that day,” Wilber says. “He indicated that he didn’t intend to run over the officers but he didn’t know if he had actually struck either one of them.” Wilber says the police officer was doing his job.

“In Iowa, police officers are allowed to use reasonable force to effect an arrest, including the use of deadly force, if necessary, to prevent harm to themselves and/or others,” he says. After being treated for the gunshot wounds, Wilkinson was transferred to the Douglas County (Nebraska) Jail where he’s being held on federal charges.

At the time of the incident, he was out of federal prison on supervised release. He hasn’t yet been charged in Iowa.