You are here: Home / News / Rally highlights ‘racial injustice’ and other CCI concerns 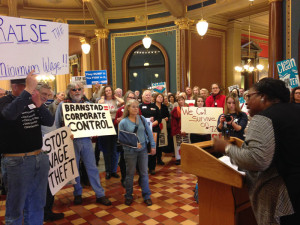 A few hundred members of Iowa Citizens for Community Improvement rallied at the statehouse today, calling on state officials to address their concerns about water quality, predatory lenders and racial profiling.

“And let’s get money the hell out of politics and get publicly-financed elections,” Bunka said, to cheers at today’s rally.

Lori Young of Des Moines told the group Iowa is not immune to “racial injustice” and she cited the case of a Virginia preacher visiting a Des Moines church this past summer.

“He was stopped by the police and accused of selling drugs just because he was driving a nice car and he was Latino,” Young said. “There are countless other incidents like this one happening in Des Moines every day, but they don’t get the attention they deserve. We need to change the narrative and start talking about these problems publicly.”

The Iowa Citizens for Community Improvement activists plan to lobby legislators for a few hours, then they’ll stage a protest outside a pay-day loan company.

Progress Iowa, another liberal advocacy group, today released a report critical of the efforts of the conservative American Legislative Exchange Council, which is known as ALEC. According to Progress Iowa, corporations that support ALEC’s activities gave more than a half million dollars to the 2014 campaigns of Governor Branstad, Joni Ernst and Republican legislative leaders.