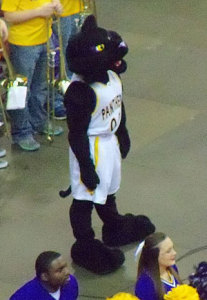 The 18th ranked UNI Panthers will host Wichita State in a Missouri Valley Conference showdown on Saturday but first up is a trip to Southern Illinois on Wednesday night. The Panthers rolled to a 16 point victory in the first meeting in Cedar Falls but the Salukis enter this game having won two of their last three.

“They keep getting better. The first time we saw them, a really young basketball team…but now they’ve got some games under their belt and are just playing with a lot more confidence,” UNI coach Ben Jacobson says. Southern guard Anthony Beane is third in the Valley in scoring at 16.5 points-per-game. Jacobson says Beane has never won in Cedar Falls and he is now making plays and shots for the team and the other players are coming along with some momentum.

The Panthers won the first meeting in convincing fashion but have dropped their last two games in Carbondale. “That’s one of the other things about having an experienced team, our guys know what happened there last year. I think the guys remember that we didn’t finish it off last year and they got us at their place, and we’ve got to get prepared and we’ve got to do a little bit better this year,” according to Jacobson.

UNI is 7-1 in the Valley while the Salukis are 2-6. Southern coach Barry Hinson says it’s a big challenge, but they are excited to play a top 20 team and trying to figure out how to stop UNI’s Seth Tuttle. The Panthers currently rank sixth in the nation in scoring defense and Hinson says a big part of that is their ability to stop dribble penetration.

The Panthers are 18-2 overall.