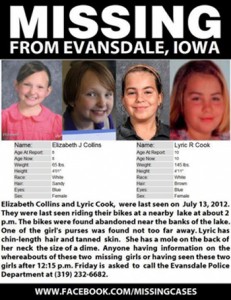 Oe of the posters used when Elizabeth Collins and Lyric Cook-Morrissey went missing. They were later found dead.

Officials investigating the 2012 kidnapping and murders of cousins Elizabeth Collins and Lyric Cook-Morrissey in Evansdale are hoping a group of national experts can help them solve the crime.

A representative from the Evansdale Police Department and Iowa Division of Criminal Investigation are heading to Alexandria, Virginia, today to meet with a large panel of experienced investigators and psychologists.

Local officials are hoping a group put together by the National Center For Missing and Exploited Children will offer suggestions on additional testing or areas to be looked at in the unsolved case. Representatives with the U.S. Marshal’s Office and the Federal Bureau of Investigation are on the panel that will review the high-profile Iowa case on Thursday and Friday.

It’s not the first time investigators from the National Center have visited the case. Four representatives met with local investigators last summer to review information, look for further evidence and offer their forensic assistance.

This week’s travel is a follow-up to that initial meeting and will now go to a full panel for review. According to Evansdale police, the National Center has provided forensic testing and intelligence gathering since the beginning of the case and will continue to offer its many resources as needed. The National Center is paying all expenses associated with this week’s trip to suburban Washington, D.C.