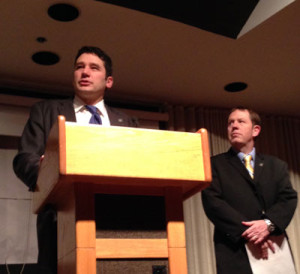 Key legislators say a 10-cent increase in the state gas tax has a good chance of passing the legislature in February and going into effect as early as March.

“I think the overall consensus is to go 10 cents now…We’re so far behind that we need to implement it right away,” Senator Tod Bowman, a Democrat from Maquoketa who is chairman of the Senate Transportation Committee, said this morning.

Representative Josh Byrnes, a Republican from Osage who is chairman of the House Transportation Committee, has been in the same private negotiating sessions with Bowman, Governor Branstad and legislative leaders.

“We’re trying to keep things as simple as possible,” Byrnes said. “The less complexity on this, the better.”

According to Byrnes, that’s why negotiators at this point are favoring an increase in the already-existing per-gallon tax rather than trying to pass some new way to finance road and bridge projects in Iowa. Senator Bowman said the need is great — an estimated $215 million yearly shortfall to address critical needs in the state’s transportation infrastructure.

The two committee leaders met early this morning with a large group of city and county officials as well as road builders who are in Des Moines to lobby legislators to boost the amount of money available to expand and maintain the state’s transportation network.

“It’s moving forward and looking good and looking promising. That doesn’t mean that we rest, though,” Byrnes said. “I would tell you guys that since you’re down here today, make sure that you’re pulling out your representatives, your senators. I mean, you still have to apply the pressure, O.K.? This bill has not moved forward. It hasn’t been signed yet. Things can fall apart very quickly down here.”

Iowa Department of Transportation director Paul Trombino also spoke this morning at the “Transportation Day” event. He offered a point-by-point response to critics of a gas tax hike. Trombino said the state can’t cut in other places or shift things around to find enough money to meet the “critical needs” of Iowa’s transportation network, plus Trombino warned Iowa’s manufacturers will become less competitive if the system isn’t updated to reduce congestion in key areas.

“If we choose to allow the system to continue to deteriorate, it will impede business and it will detract from quality of life,” Trombino said, “and ultimately it does not attract and maintain the workforce that we need for today and tomorrow.” 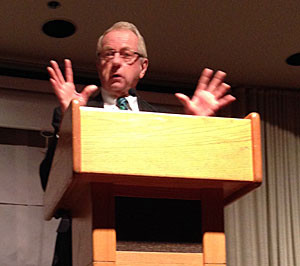 And David Rose of Clinton, the chairman of the Iowa Transportation Commission, dismissed the idea of closing some of the state’s little-used roads and bridges.

“We can’t do that because we are a unique state,” Rose said during his remarks at the “Transportation Day” event. “Every county in this state produces something that the world wants. (It’s) called food.”

The state’s per-gallon tax on motor fuel is deposited in the “Road Use Tax Fund” and, according to the state’s constitution, that money must be spent on the state’s road system. Key legislators say that’s one reason raising the gas tax is emerging as a favored option, since other means of raising money are not constitutionally protected and, in the future, might be diverted to other uses.