You are here: Home / Business / Wage theft victims tell their stories at statehouse 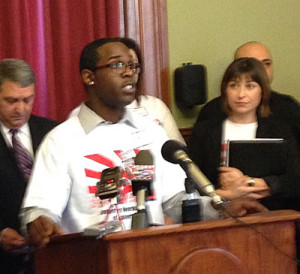 Four Iowans who say they’ve been the victims of wage theft testified at the statehouse Tuesday, part of an effort by Senate Democrats to build support for a bill that would require businesses to provide employees with a written record of how they’re to be paid.

Senator Bill Dotzler of Waterloo says he and other Democrats tried to make that state law last year, but Republicans in the House rejected the idea.

“I think that we’re actually encouraging bad actors to steal from Iowans by failing to require this basic paperwork,” Dotzler said during the news conference organized by Senate Democrats.

Valentine Ruiz of Conesville spoke through an interpreter as he talked about his case. State investigators determined he had not been paid for $1200 worth of work, but three years later he still hasn’t gotten a check from the business in West Liberty.

“If this is not theft, then what is theft?” Ruiz asked.

Juan Tristan of Des Moines runs a dry wall business with 30 employees and he said his company didn’t get paid for the last 45 days of work at apartment complex in West Des Moines.

“They told us as soon as you finish the job, you’ll get the full payment,” Tristan said. “…I just don’t supervise, I work myself and we kept working and we finished everything and we went and asked for the paycheck, they said that we don’t have nothing coming.”

Katie Wilson worked as a server at an Appleby’s in Coralville for about six years.

“I was devastated when I found out management was illegally taking my tips…It happened to all of my co-workers,” Wilson said. “Wage theft is an epidemic in the restaurant industry.”

Justin Banks worked as a server at the same restaurant for three years.

“Here in Iowa wage theft is a number one crime because there’s virtually no consequence to the employers who steal from the workers,” Banks said. “…The left and the right need to meet center, because this affects all your constituents.”

The current chairman of the Iowa Association of Business and Industry has said “grandstanding” on the issue of wage theft isn’t productive and legislators should, instead, provide “more resources” so state officials can enforce current laws. Senator Dotzler bristled at that.

“Getting paid for the work that you’ve done so you can feed your family, if they want to call that grandstanding, then I don’t know if they’ve got the same core values that I think most Iowans have,” Dotzler said.

Senator Rick Bertrand, a Republican from Sioux City, sat in the audience at yesterday’s news conference. He agrees with the business group. He said forcing more “paperwork” on every Iowa business isn’t the answer.

“If you have 20 kindergarteners out there and Tommy jumps in a mud puddle, why are we making all 19 (other) kindergarteners the next day show up in boots?” Bertrand asked.

Bertrand plans to introduce legislation that would set up a toll-free number workers could call to report allegations of wage theft.

According to Bertrand, Republicans want to “inject more funds” into the state Workforce Development agency to enforce current law, but he can’t yet say how much money or how many new investigators Republicans would like to hire. Senator Tony Bisignano, a Democrat from Des Moines, is chairman of the Senate Labor Committee where this issue will be debated.

“In some industries, stealing from the paychecks of low-income workers has become a business model,” Bisignano said.

He plans to bring up the bill that would not only require a written record of the terms of employment, it would provide some “whistleblower” protection to Iowans who testify for fellow workers who wage theft victims.