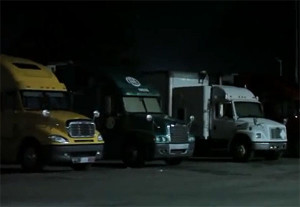 The United States Attorney for the Northern District of Iowa and the leader of the state’s Motor Vehicle Enforcement (MVE) Division were on hand at two Evansdale truck stops in eastern Iowa today to talk about human trafficking.

“Traffickers often target truckers as a possible consumer of goods if you will in the trafficking business. So, we applaud the Truckers Against Trafficking to activate truckers in a positive way,” Techau says.

Visiting the truck stops is a way to help educate truckers on the problem. “Let them know red flags, what to look for, what to listen for, so they can report possible suspicious activity and have a positive impact,” Techau says. He says educating truckers is a way to get at the problem in two areas. “Truckers are sometimes asked to bring someone across state lines, but also sometimes they are asked to purchase sexual activities, so it’s a two-fold win-win,” Techau says. “And truckers want to do the right thing, and so the Truckers Against Trafficking makes that possible with good information, a hotline. They want to work with law enforcement and other agencies.”

He says human trafficking is a major problem in the U-S. “Nationally, human trafficking is a $32 billlion-a-year industry, the second most lucrative crime in the United States behind drug trafficking,” Techau explains. Techau says the interstate highways and Iowa’s location puts the state in the center of the issue. “Iowa’s a major traffic hub, east, west, north and south, and all directions inbetween. Truckers can be a big part of the solution to this and we’re proud to work with the Iowa DOT and Truckers Against Trafficking to make truckers and all Iowa citizens aware of this issue,” Techau says.

Officers distribute wallet cards and window clings to drivers after talking with them. Educational materials are available for truckers at rest stops and weigh stations. You can find out more information at the Truckers Against Trafficking website at: www.truckersagainsttrafficking.org.

Below is a public service announcement on human trafficking: