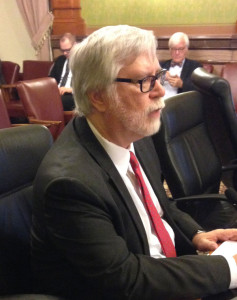 A panel of legislators grilled the state official who was dispatched to defend Governor Branstad’s proposal to close the state-run Mental Health Institutes in Clarinda and Mount Pleasant.

Rick Shults, the director of mental health and disability services for the Iowa Department of Human Services, testified before a budget subcommittee on Thursday.

“We clearly are having difficulty in recruiting staff,” Shults said. “…The wards are outdated and they’re poorly configured. When I go to those facilities it causes me concern. There are nooks and crannies and they’re not as expansive and there are just some challenges there and there are high costs associated with these facilities.”

Representative Dave Heaton, a Republican from Mount Pleasant, countered the costs for caring for patients with acute mental illness are higher at the Cherokee and Independence Mental Health Institutes which will remain open.

“I mean, it’s flying in the face of a lot of things here, Rick…you know?” Heaton said during the 90-minute question-and-answer session with Shults. “I just can’t quite understand,”

“Iowa is ranked fourth-worst in the country as far as our mental health services are concerned. We’re at the bottom,” Heaton said, pounding his fist on the table. “…It’s a mess.”

Senator Joe Bolkcom, a Democrat from Iowa City, said he doubted the agency’s claim that many patients who’re now being served in the state’s Mental Health Institutes can easily find care from private providers.

“You’re painting this rosy picture about how we’re going to have all these crisis services at the same time we’re ripping money out of the system,” Bolkcom said. “It’s to meet the bean counters’ numbers in the basement, the Department of Management. They’ve got to cut money out of this budget to pay for this historic property tax cut.”

Other legislators said they’re fielding complaints from county sheriffs who are often responsible for transporting patients to the Mental Health Institutes. Representative John Forbes, a Democrat from Urbandale, said it will be a 500-mile round trip for some departments.

“What’s the human cost to the families of these patients who are now going to be instead of 20-30 miles away, 250 miles away?” Forbes asked. “These patients need their families close by to help them get through these very difficult times in their lives.”

Shults, the DHS administrator, countered that many hospitals around the state provide in-patient treatment for severe mental illness, plus he said the University of Iowa Hospitals and Clinics and Broadlawns Hospital in Des Moines will be able to take some patients who would have been sent to the state-run facilities. The DHS expects to shift the elderly sex offenders who’re in 24-hour nursing care in Clarinda to private nursing homes.

A court ruling is expected in late February on whether Governor Branstad had the authority to close the Iowa Juvenile Home in Toledo last year. If that ruling goes against Branstad, legislators say that will dramatically alter the discussion about closing the Mental Health Institutes.