You are here: Home / News / Projected snow totals increased for the weekend 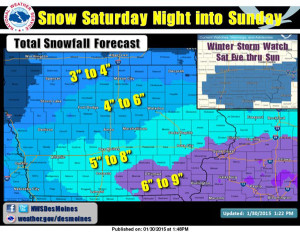 It appears more snow will be falling in Iowa this weekend than previously forecast. National Weather Service meteorologist Jeff Zogg says it will be a “long duration” snow event affecting most of — if not the entire — state.

“Right now we’re expecting south-central into southeast Iowa, basically locations from Interstate 80 to the south and also east of Interstate 35, to see the highest snowfall totals from this event. In that region, we’re looking at snowfall totals of 5 to 9 inches by the time the snowfall ends on Sunday evening,” Zogg says.

Much of the northern half of Iowa can expect 3 to 6 inches of snow between Saturday and Sunday. And the winter storm won’t be over when the snow stops flying. “The winds will be picking up and that will result in some blowing and drifting of snow,” Zogg says. “So, people who have travel plans Sunday afternoon and evening, definitely need to keep an eye on the latest conditions because we could see issues with blowing and drifting snow. Those winds will bring in colder temperatures as well. We could have low temperatures Monday morning approaching zero across much of the state with wind chills of 5-to-15-degrees below zero.”

Another chance of snow is in the forecast for next Tuesday.