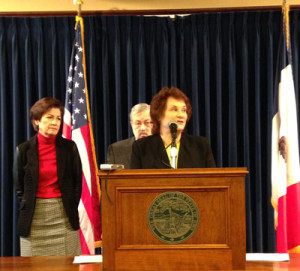 The mother of a woman who was killed by an estranged husband says a bill that toughens state policies toward domestic abusers “goes beyond what she even hoped for.”

Sheila Lynch’s daughter, TereseAnn Lynch Moore, was shot to death six years ago in a Des Moines apartment after being kidnapped in the parking lot of a Target store.

“If this bill had been in effect when my daughter was being stalked by the man she was trying to divorce, I believe with all my heart she’d still be here,” Lynch says. “I cannot go backwards, but I can certainly go forwar5d. This bill takes the electronic monitoring that I was pushing for and it goes much farther than that.”

Lynch, who lives in Nevada, spoke at Governor Terry Branstad’s weekly news conference this morning in support of a bill Branstad has submitted to the legislature.

“The bill I’m proposing, that we are proposing, ensures that repeat offenders are treated as a more serious threat to both the victims and to the public,” Branstad said.

“The crime of domestic violence is one of horrifying brutality. Often the victims live in a state of constant fear,” Branstad said. “By allowing this offense to go unchecked, it can create generations of abusive domestic partners who don’t know how to resolve conflicts without abuse, bullying and violence.”

The bill would increase sanctions against those who violate protective orders, plus paroled domestic abusers who are considered a potential risk would be subject to GPS monitoring and barred from zones where their victims live and work. That’s something Lynch said could have helped her daughter.

“When my daughter was killed I heard more times than I want to count that a protective order is just a piece of paper,” Lynch said. “And with this legislation, it will no longer just be a piece of paper.”

Lynch said she’ll do whatever she can to encourage legislators to pass the bill.

“This bill, to me, represents respect and honor for my daughter and for all the victims of domestic violence and they go across the board,” Lynch said. “There’s no boundaries — culture, race, financial, educational — it does not matter.”

The man who killed TereseAnn Lynch was sentenced to three life prison sentences. More than 2600 people were convicted of some kind of domestic abuse offense in Iowa last year and about 70 of them were being convicted of felony domestic abuse assault for a third time.