You are here: Home / Education / Grinnell College and University of Iowa collaborate on digital technology project 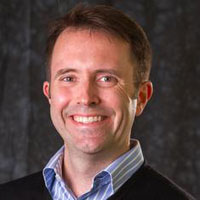 Grinnell College and the University of Iowa have won a $1.6 million grant from the Andrew W. Mellon Foundation to use in a partnership to expand the use of digital technology among faculty and students. Grinnell College English professor, Erik Simpson, says they call the work in this project the “Digital Liberal Arts.”

“We look for breadth, we look for new kinds of collaborations that we can create,” Simpson says. “There’s a great tradition in this area of forming new kinds of teams where gallery directors, faculty, students, staff, librarians, community partners, work together to create projects that often reach new kinds of audiences, that our academic projects sometimes don’t.”

This is the first time the Mellon Foundation has supported a collaborative digital project between a private liberal arts college and a public research university, but Simpson says it’s not the first time the two schools have collaborated. “So, when we saw the kinds of things that the Mellon Foundation was funding, we saw an opportunity to work together and put together a proposal that had that collaboration at the heart of it. Taking advantage of our geographical proximity to put some teams together and encourage new kinds of teams to form,” Simpson says.

He says much of the funding will go toward supporting faculty in the effort. “There’s a lot of work already underway at both schools, for instance we have scholars of Renaissance literature mapping the world of Shakespeare’s plays and their environment,” Simpson says. He says the teams created will be able to use digital tools to produce new forms of analysis, creativity and critique that are fundamental to our disciplines. “And the great thing about the grant is that we are able to expand the time that you can work on something with better support for all of the different areas that a project like this will get into,” Simpson says.

The digital work will make the end products more accessible to the public. “A lot of these projects end up on the public internet and are designed to be there from the beginning. There are other ways that they can become public too,” according to Simpson. “For instance, I have a colleague in the theater department who has worked with students to design interactive lighting and sound spaces where the audience or the participants in the project come in and are able to make things happen by the way that they move. So, that’s another way of making something public through technology that isn’t on the internet.”

The grant is for four years.