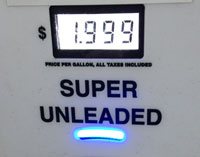 Gas prices had been below $2 a gallon until recently.

A new Loras College Poll has found a majority of Iowans support an increase in the state gas tax. Nearly 54 percent of those surveyed said they would tell their legislator to vote for a ten-cent hike in the state fuel tax.

Political science professor Christopher Budzisz, the director of the Loras College Poll, says all 1200 Iowans who were surveyed voted in the 2014 General Election.

“What you tend to get there are people who are stalwarts, who are motivated, who are politically aware, attuned and politically active,” Budzisz says. “And we were trying to capture the sentiment of those individuals.”

The Loras College Poll found support among independents and among Democrats. Among Republicans for an increase in the per-gallon tax on motor fuel, nearly 49 percent opposed the idea, while over 45 percent supported the tax hike. Budzisz says those who identified themselves as “Tea Party” Republicans were the only segment of those surveyed who registered the strongest opposition to a gas tax increase.

“And that would make sense consistent with that segment of the Republican Party’s towards the size of government and the level of taxation to being with,” Budzisz says. “Tea Party Republicans tend to believe that they’re taxed enough already.”

About seven percent of those surveyed said they were undecided on the issue, while 39 percent said they’d tell their state representative and senator to vote against a gas tax increase. Governor Terry Branstad says he’s surprised by the Loras Poll results.

“Generally, the polls have been against it,” Branstd says. “…I haven’t seen this. It’s brand new, but I do think more and more Iowans have come to the realization that we have a real need for our road and bridge infrastructure…and we are working on a bipartisan basis with the legislature to try to address this issue.”

Other polls have shown a majority of Iowans oppose a gas tax increase. The most recent Des Moines Register “Iowa Poll” on the subject was conducted last February and found 58 percent of Iowans oppose a ten-cent hike in the state fuel tax. Budzisz says his Loras College Poll was conducted this January, after key statehouse leaders indicated there’s growing support in the legislature for a gas tax hike.

“I think that’s one of the reasons why this was a recent poll that kind of captured a bit of a fait accompli at the statehouse,” Budzisz says, “that something will get done.”

The Loras College Poll was conducted January 21-26 and has a margin of error of less than three percent. Iowans for Tax Relief commissioned a poll in early January which found nearly 78 percent of Iowans oppose an increase in the gas tax. A majority of those surveyed by the anti-tax group said there’s already enough money to build and maintain Iowa roads and bridges.