You are here: Home / News / NAACP lobby day at statehouse 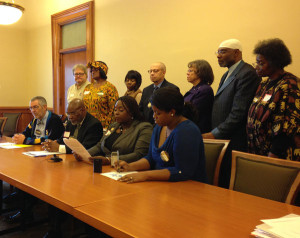 Members of the NAACP spoke today at the state capitol.

Members of the NAACP are lobbying at the statehouse today, urging lawmakers to address issues like racial profiling and racial disparities in Iowa’s criminal justice system. Nearly 10 percent of the adult black men who live in Iowa either have been sentenced to prison or are on parole.

“Today we have come for change,” Betty Andrews, the Iowa-Nebraska president of the NAACP, said during a statehouse news conference. “No matter how many years in the making these daunting statistics…now is the time to address them.”

“With the recent events in Ferguson and New York and all across the country,” she said, “so it’s time to step up and take a stand.”

The group is asking Iowa lawmakers to require police to videotape all traffic stops and arrests, plus Andrews said it’s time to “decriminalize” marijuana.

“Studies have shown that African Americans are several times more likely to be arrested for drug offenses, though they use at the same rate (as whites),” Andrews said. “And in Iowa that’s really brought home by an ACLU study showing we are number one in the nation for marijuana arrests.”

The group is also asking Governor Branstad to issue an executive order that will automatically restore voting rights to those who’ve completed their parole. Branstad requires each person who’s done their time to submit an application to him, showing they’re current in paying fines and restitution.

The Iowa-Nebraska NAACP represents 30 branches in the two states and about two dozen members from Waterloo, Davenport, Cedar Rapids and Ames are at the statehouse today to lobby legislators.