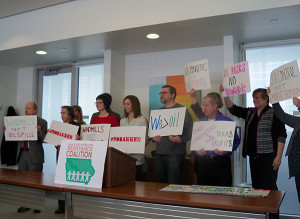 A coalition of groups has formed to fight the proposed Bakken oil pipeline across Iowa.

Representatives from 20 different groups are getting together to try and block the proposed Bakken oil pipeline’s path across Iowa. They’re calling themselves the Bakken Pipeline Resistance Coalition.

Cheryl Valenta is a member of Iowa Climate Advocates and the new coalition. “The role of our coalition is to educate Iowans about the facts of the proposed Bakken pipeline, and true consequences that exist for generations to come,” Valenta says. “Nobakken.com  is our website that’s packed with great resources, including maps, land owner videos, calendar of events and action steps.”

The pipeline would cut diagonally across 18 Iowa counties, carry crude oil from North Dakota to Illinois and on down to the Gulf Coast. The Sierra Club’s Wally Taylor is an attorney from Cedar Rapids who is helping with the coalition’s legal fight against the pipeline now that Dakota Access has filed an application for a permit with the Iowa Utilities Board. 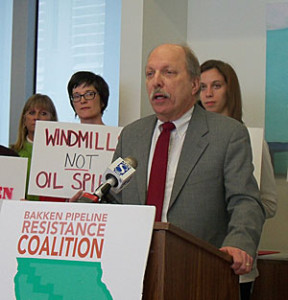 “We will be gathering evidence, obtaining expert witnesses, and challenging the allegations of the pipeline company about how this pipeline will benefit Iowa and the nation,” according to Taylor.

Taylor says they will push the IUB to deny the permit for the pipeline. “We will show that it hurts Iowa’s air, land and water. Hurts our people, hurts our farmland and does not benefit in any way, Iowa citizens and the people of Iowa,” Taylor says. Ross Grooters represents Iowa Citizens for Community Improvement in the coalition. “We must cut ties to harmful fossil fuels whose spills have destroyed U.S. waterways and increased carbon in our atmosphere,” Grooter says. “Every barrel of oil extracted and transported through out state leads us away from renewable energy, impacting current and future generations.”

Arlene Bates is a farmland owner in Story County. “We own land that have a natural gas line, two power lines and an interstate run through. We have supported the needs of our neighbors, our community and ourselves, but we have also benefited,” Bates says. “With the Bakken pipeline wanting to come through the state of Iowa and our land, I do not see how the state of Iowa can justify allowing the use of eminent domain to a private company.”

Branstad undecided on proposed pipeline through Iowa for Bakken crude