You are here: Home / Crime / Courts / Cresco native takes over as Department of Public Safety leader 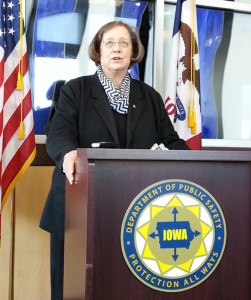 The new leader of the Iowa Department of Public Safety says one of the biggest challenges facing law enforcement officials in the state is laws that don’t keep up with changes in technology that could help solve crimes.

Governor Branstad on Wednesday appointed Roxann Ryan as commissioner of the DPS. The 59-year-old Ryan says privacy issues are also a growing concern for law officers. “Because so many people are well connected with each other, but they’re also very connected in public forum, which makes it far more challenging for us to be able to respect those privacy rights while also conducting appropriate investigations,” Ryan said.

The lawyer, with 35 years of experience in state government, had been serving as acting commissioner of the DPS since January 9. Ryan does not anticipate making any “drastic” changes to the agency. “The focus, I think, is more on coordination of efforts,” Ryan said. “We’re seeing that trend nationally. There are a lot more connections within the state and across state lines. So, I think we’re going to continue to build on those kinds of connections.”

In her new job, Ryan will oversee nearly 1,000 employees in divisions that include the Iowa State Patrol, narcotics enforcement and criminal investigation. In recent years, some lawmakers have raised concerns about a declining number of state troopers on Iowa roads.

Ryan said she’s comfortable with the size of the force, noting there are “a lot more” troopers on the road today than there were two years ago. “I would characterize it as saying that we no longer have dangerously low levels of troopers on the road, so I feel better about being able to provide the level of staffing that we need for the State Patrol,” Ryan said. “Obviously, I think we could do good things with more people, but at this point, we are able to keep people in Iowa safe and that’s the bottom line.”

There have been a few high-profile cases in recent years of state troopers who were cited for speeding after initially not being ticketed by the officer who initiated the traffic stop. The troopers involved were either off-duty at the time or were driving an SUV carrying the governor. Ryan addressed the matter Wednesday in her first news conference as the DPS commissioner. “My message is — if I’m caught speeding, I should get a citation,” Ryan said. “I don’t think the law applies any different to people in law enforcement than it does to anybody else.”

Ryan is hoping Iowans haven’t lost confidence in the Iowa State Patrol because of the recent incidents. “I would hope that cases like that have not had an impact on public trust,” Ryan said. “I think our response…has been clear. If there are complaints filed, we take those seriously, we investigate them, and we take whatever action is appropriate.”

Ryan’s appointment is subject to Iowa Senate confirmation. She is replacing Larry Noble, who retired last week for a second time. The 64-year-old Noble was DPS commissioner between 2011-12. He agreed to return to the job in 2013 after Brian London’s short tenure as commissioner.

Ryan is a native of Cresco. She joined the Iowa Department of Public Safety in 2006 after working for more than two decades in the criminal division of the Iowa Attorney General’s office.