You are here: Home / Agriculture / Demand for powdered eggs behind plans for new plant in Winnebago County 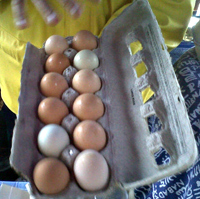 The Chief Financial Officer for Rembrandt Enterprises says a growing market for egg-protein powder led to their decision this week to expand their operations in Winnebago County. CFO Jeff Peterson says the large-scale egg processing plant in Thompson will help the company expand the distribution of Iowa-produced egg-protein powder within the United States.

He says there’s a high demand for the powder as it’s used as part of food ingredients as part of baking or sauces. Peterson says the protein powder is simply egg products with the liquid removed, which allows the finished product to be more economically shipped for industrial uses. “There’s a lot of domestic customers that use a lot of our egg powder because they know it’s more economical to just ship the protein powder as opposed to the water along with it,” Peterson says.

He says the company knows there’s value to converting the liquid to powder because it’s economic to ship even overseas and across borders and he says it will be more economical for countries to ship the product in than to try to make it locally. Construction on the new $92 million facility is expected to be completed by the end of 2015, with processing starting in January 2016. Rembrandt currently employs 134 at their Thompson facility. The new facility will employ an additional 197 people at start-up with the minimum starting wage for all new positions being $15 dollars-an-hour benefits.