You are here: Home / Health / Medicine / Iowa Army of Pink at statehouse to lobby legislators 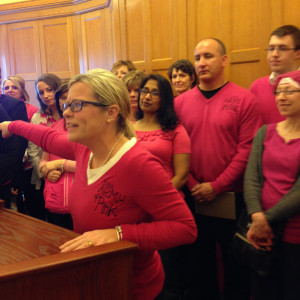 A group of breast cancer survivors in urging legislators to pass a state law that would require health care providers to let women know if they have dense breast tissue, so they can consider having an ultrasound in addition to a yearly mammogram.

“I will not keep quiet about this,” Leasure said during a noon-time news conference at the state capitol. “…This bill is about saving lives.”

Leasure used to get ultrasounds along with her yearly mammograms when she lived in Massachusetts and Colorado because she has dense tissue in her breasts, but was told when she came to Iowa in 2002 that just a mammogram would suffice.

Leasure and over two dozen women calling themelves “The Iowa Army of Pink” are at the statehouse today, lobbying legislators on the issue. They say 22 states have laws which require health care providers to notify women if they have dense breast tissue.

This is the third year the legislation has been introduced in Iowa’s legislature. Groups that represent health care professionals have opposed it in the past. They argue there is”no consensus in the scientific community on the relationship between breast density and cancer risk” and say women will be “frightened” into having unnecessary tests.