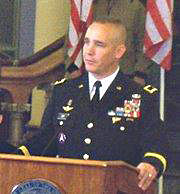 The leader of the Iowa National Guard says the past 13 years of war have turned his soldiers and airmen into the most capable and “battle-tested National Guard in the history of Iowa.” Adjutant General Timothy Orr delivered the annual “Condition of the Guard” address at the statehouse this morning.

“Approximately 3,700 currently serving Iowa National Guard soldiers and airmen are combat veterans. That’s more than 42 percent of our force, the highest percentage in modern history,” Orr said. “And our men and women have operated in 35 different nations since 9/11.”

Today, 150 Iowa Guard soldiers and airmen are on active duty outside the country and Orr said that’s the lowest deployment level since operations began for the wars in Iraq and Afghanistan.

“We’re now at a point where our current and projected demands for Army and Air Force assets around the globe may continue to decrease, depending on the needs of the nation,” Orr said. “…We currently have no Iowa National Guard units identified for future overseas deployments in 2015, a first for our organization since 2000.”

An Iowa Guard medical unit based in Washington, Iowa, had been assigned to go to Africa to respond to the Ebola epidemic, but those orders were cancelled about two weeks ago. 2014 was also “a relatively quiet year” in terms of Guard response to emergencies within the state’s borders and Orr said that allowed the Guard to plan, prepare and practice for natural and man-made disasters.

“Last week the Iowa National Guard hosted a cyber security workshop, to begin developing a comprehensive cyber incident response system for the state,” Orr said. “This forum was the first of its kind.”

More than 60 officials from a variety of state agencies participated in the workshop.