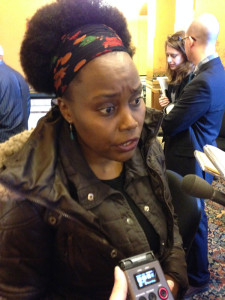 A small group of legislators is trying to find a way to rework state regulations and let women from Africa who’ve settled in Iowa open hair-braiding businesses.

Nancy Mwirotsi of Des Moines, a native of Kenya,  is trying to help refugees from the Sudan, Liberia and Eritrea who would like to do this work, but can’t because of current state cosmetology rules.

“Right now they’re sitting at home. They don’t have money. They’re depending on government subsidies,” Mwirotsi says. “They’re asking us to open this way so that they can open shops ’cause it’s all they know. They cannot go to school because they can’t speak English, but they’re very good at braiding.”

Mwirotsi has had her hair braided since she was a baby and she says the going rate for hair braiding here in Iowa can be as much as $200 an hour.

“Microbraids — those are very, very tiny braids, if one person does it for you, it could take over 12 hours,” Mwirotsi says. “And that’s why, if we had the opportunity to open salons or braiding shops, you could have two or three people working on somebody’s hair.”

But state rules force such hair-braiding businesses to get a cosmetology license, which requires over 2,000 hours of training. Even if they get a cosmetology license and set up shop in their home, it’s expensive. Susan Reynolds, the executive officer of the Iowa Board of Cosmetology Arts and Sciences, says there has to be both a bathroom and a separate entrance just for the clients.

“You have to have a sink and the counters and a chair and hot and cold running water. There has to be some type of fan to remove any fumes,” she says. “Those are kind of the building standards that you’d have to meet.”

Representative Dawn Pettengill, a Republican from Mount Auburn, is part of the group trying to figure out an alternative, perhaps a certificate in hair braiding that requires just a few hours of training.

“(We’re) trying to let these people have the ability to work and let them be entrepreneurs,” Pettengill says.

Cosmetologists argue if the women take money for braiding hair, there should be some state oversight. Kellie Paschke, a lobbyist for the Cosmetologists and Barbers of Iowa, says braiders should at least be required to take a course about proper hygiene and how to recognize skin and hair problems.

“If you had a client or a customer who did have, for example, hair lice — making sure that the tools you use, like a comb, or the chair that they sat in is sanitized properly before the next customer so that it doesn’t pass on to somebody else,” she says. “That’s one of our primary concerns on the sanitation side.”

Others argue this is a cultural activity and government shouldn’t regulate culture. Representative Deborah Berry, a Democrat from Waterloo, says “anywhere you go in the African-American community, people are braiding hair” and this could be a chance for these recent immigrants to earn a good living.

“Because I’ve walked into salons here in this state and said, ‘Hi, I’d like to have my hair done,'” Berry says. “And I’ve had people say, ‘Well, we don’t do black hair. Sorry.”

Representative John Wills, a Republican from Spirit Lake, is a biologist who has some concerns about sanitation. He favors requiring hair braiders to take some training and get a certificate from the state.

“I definitely want to work this out,” Wills says. “I want to find a way to do this because I believe in small businesses.”

Kent Hartwig, a lobbyist for the state’s cosmetology schools, suggests some sort of state oversight is necessary.

“I totally appreciate what is trying to be attempted here, but if someone has a negative experience with an African-style braider, they would have no recourse other than to use the justice system,” Hartwig says.

A few states that — like Iowa — force hair-braiding businesses to get a cosmetology license have been sued, and lost. The three lawmakers assigned to work on the bill signed off on a first draft, but vow to try to find some sort of middle ground to accommodate concerns raised at Wednesday’s hearing.