You are here: Home / Fires/Accidents/Disasters / Fire destroys business in Edgewood 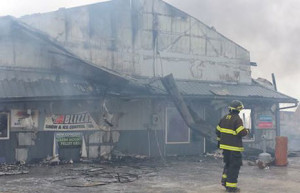 An early morning fire destroyed a business in the northeast Iowa town of Edgewood. Flames were discovered coming out of Edgewood Auto and Tire and Edgewood Saw and Supply along Highway 3 around 3:30 A.M.

Edgewood Fire Chief Jay Degenford says the building was burning pretty good by the time they got there. “It was a rather large situation, so we paged mutual aid right away from Strawberry Point, Greeley and Colesburg,” Degenford says.

He says the building burned so fast, there was not much they could do. “Unfortunately it was a defensive fire, we could not do any interior on it, except on the office,” Degenford says. “We were able to salvage a lot of the office as far as computers, records, quite a bit of the inventory out of the main office and display room,but the shop — we were not able to enter that.” 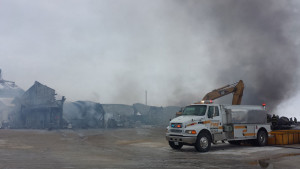 Firefighters were unable to save much of Edgewood Auto and Tire.

Thick, black smoke was still pouring from the back of the building several hours after the fire broke out, with some small flames still visible. The front facade and east side of the building remained standing, but most everything else laid in a pile of charred black rubble.

Degenford says the owners, Toby and Tracy Schroeder, were on a trip to Mexico when the fire broke out, and are now headed back home.

Degenford says all the firefighters came out okay. “No firefighters injured, some cold people I believe. Hopefully they’ve gotten thawed out by now,” Degenford says. The American Red Cross was on hand providing food and beverages to the workers, employees and family. The Red Cross says a couple of local Edgewood businesses had also donated food. The cause of the fire remains under investigation.