You are here: Home / News / New group urges Iowans to get GOP candidates to go beyond ‘talking points’ (AUDIO) 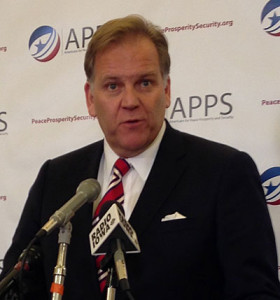 A former Iowa GOP chairman and a Republican who ran for office statewide in 2014 are part of a new group that’s encouraging Iowans to push presidential candidates to reveal how they’d make foreign policy decisions.

Matt Strawn led the Republican Party of Iowa from 2009 through 2012. He’s now leading the Iowa advisory board for “Americans for Peace, Prosperity and Security.”

“Whether you’re in Osceola or whether you’re in Osage, there’s going to be an influential Iowan looking a candidate in the eye and engaging them in deep conversation about what they believe America’s role in the world should be,” Strawn says.

Sam Clovis of Hinton is a Morningside College professor who ran for the U.S. Senate, then ran as the GOP’s nominee for state treasurer last year. He’s also signed on to be a leader of this new group.

“What we really have to focus on is the quality of the candidates that we have coming forward and whether or not they are able to present a coherent and comprehensive view of what national security is all about,” Clovis says.

Former Michigan Congressman Mike Rogers, a former FBI agent who served as chairman of the U.S. House Homeland Security Committee, is the national leader of Americans for Peace, Prosperity and Security. Rogers says group’s aim is to provoke “thoughtful discussion” from the candidates on national security issues.

The group is only targeting Republican candidates. Rogers discounts the idea the effort is meant to prepare the eventual GOP nominee for a face-off in the General Election against likely Democratic nominee Hillary Clinton, who served four years as secretary of state.

“Absolutely not,” Rogers says. “…This isn’t a political issue. It’s not some way we’re going to get cute about trying to position one candidate over another candidate. This is about the real substantive issue of we’re in some deep trouble overseas.”

Americans for Peace, Prosperity and Security plans to hold regional forums in Iowa, then sponsor an event this fall for all the Republican presidential candidates. The group is making similar plans in New Hampshire, the state that hosts the nation’s first presidential primary, and in South Carolina, the first primary state in the south.