You are here: Home / Education / U-I president: ‘This is a gift; the U-of-I is not paying for AIB’ 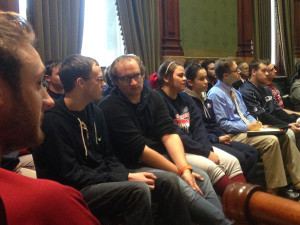 AIB students at the statehouse.

The president of the University of Iowa and a trustee of a Des Moines business school say there’s no “merger” between the two institutions. Instead, Chris Costa, the chairman of the board of trustees for the American Institute of Business, on Monday told state legislators the 22-acre AIB campus will be a “gift” to the University of Iowa.

“Since our initial announcement, we have learned that merging or integrating the two schools is not possible due to accreditation requirements,” Costa said.

“Now I want to be very clear about my first point: this is a gift and the University of Iowa is not paying for AIB,” Mason said. 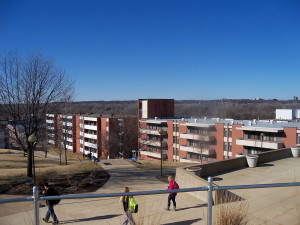 Housing on the AIB campus.

Mason suggested that once the University of Iowa takes over on July 1, 2016, the campus that sits a couple of miles north of the Des Moines airport could easily accommodate 2000 students. That’s double the number who are enrolled at AIB today.

“We intend to operate this campus as we operate all of our auxiliaries, to pay for themselves, so we anticipate zero impact on the state budget,” Mason told legislators.

“We’re in the process, obviously, of trying to figure all this out,” Mason told legislators.

Lawmakers on the committee quizzed Mason and Costa about the deal. One complained legislators hadn’t been tipped off about the plan before it was announced in a news conference. The statehouse hearing room was packed with AIB students, many athletes. AIB athletic programs will end this May when the softball and baseball seasons are over, prompting Representative Walt Rogers of Cedar Falls to make this offer: “I guess I’ll put in a plug. If some of you guys want to go up and play at the University of Northern Iowa, we could probably use some good baseball players.”

Legislators like Representative Chuck Soderberg Le Mars asked administrators from the two schools to do more to help the AIB students figure out if they qualify to transfer to the University of Iowa.

Counselors from the University of Iowa will be on the AIB campus this Thursday to advise students who won’t graduate before AIB closes on June 30, 2016. There have been student protests on the Des Moines campus. Some AIB students complain their three- and four-year athletic and academic scholarships at AIB will not transfer.