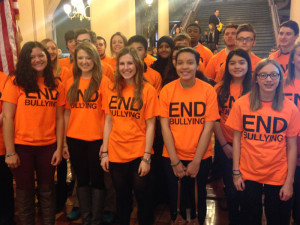 Eighteen-year-old Cecelia Martinez, a senior at Marshalltown High School, is passionate about the issue because her younger nieces and nephews have been subjected by cyber-bullying.

“When bullying happens over social media, it’s constant,” Martinez said. “If you have a phone, usually you’re always on it and you’re always looking at it, always checking it and so it’s very easy for a number of people to just constantly send streams of negative messages towards you. Most of the time it’s very hard to ignore, especially younger kids who don’t know how to protect themselves online and how to stay secure. They’re especially vulnerable.” 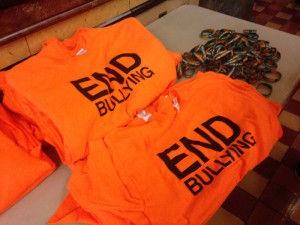 Martinez said her niece had to delete her Facebook page and Twitter account to stop the harassment she was getting. Martinez was a featured speaker at the governor’s statehouse news conference today.

“I saw young people who had been bullied turn to alcohol and drugs as a way to cope with their depression or long-term effects of bullying,” Chris Branstad said.

Iowa’s first lady said she got involved to send the message to Iowa children that “they have an ally” in both the governor and in her.

“Bullying is serious. Bullying is harmful,” she said. “It is a public health problem that has a lasting impact on the well-being of our children, both students who have been bullied and the bullies themselves.”

Governor Branstad has tried for the past two years to get legislators to pass a bill that would give schools greater authority to police bullying that occurs off school grounds and beyond school hours. He was joined today by students from Marshalltown, Sioux City, Cardinal of Eldon and Waukee, most of whom were wearing orange shirts with the message “END BULLYING” on the front.

“We’re all here today because we share a common goal of ending bullying in Iowa,” Branstad said. “Every child in Iowa deserves a safe and respectful learning environment.”

Branstad said he’s confident some tweaks to the bill, like requiring parental notice when schools investigate alleged bullying, make it more likely the bill will pass in 2015. Paul Gausman, the superintendent of the Sioux City School District, said the bill not only gives schools more authority to police bullying off the school grounds, it will provide new training for school officials who investigate allegations of bullying.

“We have to think about the fact that cyber-bullying, social media bullying didn’t occur 10 years ago and we find ourselves in this new situation and we need new strategies,” Gausman said. “This will provide consistency and authority for those of us in the districts that are trying to deal with these challenges.”

Gausman brought 30 Sioux City students to the statehouse today to lobby legislators to pass the bill.