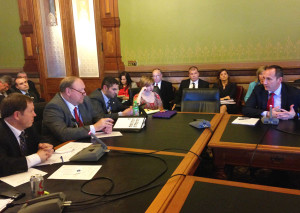 The state’s gas station and convenience store owners are pleading with legislators to phase in an increase in the state’s fuel tax, arguing motorists a

“I can’t sell it and collect the tax for you if we’re the highest tax state.” Delia Meier, a vice president at the Iowa-80 Truck Stop in Walcott, told legislators this afternoon.

Meier and over two dozen people testified before three state senators who have signed off on a bill that would increase Iowa’s fuel tax by 10-cents a gallon. Meier said the market “needs time to adjust” to a 45 percent increase in the Iowa’s fuel tax and phasing that in would be better for truck stops.

Key legislators dispute that, saying gasoline in Illinois is more expensive because that state has both a per gallon tax and then a sales tax on the entire sale. Iowa convenience store owners say that with today’s low gas prices, the sales tax impact isn’t as great so gas in Illinois will be cheaper if Iowa’s gas tax goes up a dime a gallon. Tom Cope, a lobbyist for Casey’s General Stores, suggested legislators opt for a five-cent gas tax hike this year, then another five cent increase next year.

“Allow the consumer to digest that increase,” Cope said, “not make us right away the highest gas tax state of all the states that are surrounding Iowa.”

Kellie Paschke, a lobbyist for the Petroleum Marketers and Convenience Stores of Iowa, urged legislators to consider raising vehicle registration fees and other options in addition to a “smaller” increase in the tax on each gallon of fuel sold.

“We’re not here today saying, ‘Don’t do anything.’ We know something needs to be done,” Paschke said. “Our approach is, ‘Let’s do a broadbased solution to get it done.”

Lobbyists for labor groups, road builders, the trucking industry and business groups all spoke in favor of the 10-cent gas tax hike. Jeff Boeyink is a lobbyist for the Highway 61 Coalition which represents eastern Iowa cities, counties and businesses that operate along the route that stretches from Keokuk to Dubuque.

“It’s an area in the last number of year where you’ve seen substantial growth in manufacturing and truck traffic and so a lot more pressure is being put on that part of the state in regards to road funding,” said Boeyink. “And we’ve come to the realization that without additional funds, some of those projects just aren’t going to be taken care of.”

Bob Hartwig, a lobbyist for the Iowa Bankers Association, said raising the gas tax the association’s top priority in 2015.

“We think that this is a vital economic development issue,” Hartwig said. “We are hearing from our members from Larchwood to Keokuk on it.”

Scott Hedderich, a lobbyist for the Renewable Energy Group that operates three plants in Iowa, said his company’s fleet of trucks gets beaten up on Iowa’s roads, just like the buses, cars and trucks that traverse the same highways.

“We have to stop more often in the state of Iowa than in other states that we operate in to take time to fix those trucks that have come in that have got busted values, busted this, jammed that because of the condition of the roads that they operate on,” Hedderich said.

County officials have been lobbying for an increase in the gas tax for years, but county groups are now registered as undecided on the bill that’s pending in the senate. Bill Heckroth represents county supervisors in Iowa and he cited concerns about sections in the bill that call on cities and counties to only take on bonded debt for the “lifespan” of a road or bridge.

“So our question is if there’s legislators that know of a situation where this hasn’t been practiced, we’d certainly like to know it,” he said. “If there isn’t a situation, then we question why the language is there.”

The chairman of the Senate Transportation Committee said the gas tax bill will be debated in his committee next Tuesday.