You are here: Home / Sports / Panthers stay focused amidst success on the court 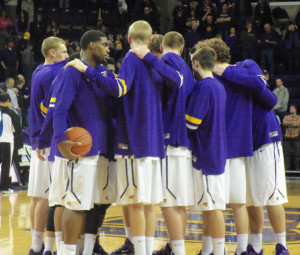 UNI players huddle before a game.

Despite a 22-2 record and the highest ranking in program history UNI coach Ben Jacobson says his team remains grounded and focused on the immediate task. The Panthers take an 11-game winning streak into tonight’s matchup at home against Illinois State.

“That’s one of the things I’m most proud of with these guys, because there hasn’t been as much adversity as there has been highly positive things that have happened for this team because of the way they have played,” Jacobson says. “I’ve been through both and regardless of which one it is, you still have a challenge to be focused on what it is you do each day, and that without question to me in the key.”

A late three pointer by Nate Buss allowed the Panthers to escape in the first game against the Redbirds 54-53 back on January 25th. He says they will have to take care of the basketball at Illinois State changes their defense frequently and is able to quickly make points off of turnovers.

Jacobson says the Panthers must be tougher with the ball to get quality possessions and better shots, and he says they will have to block out and rebound.