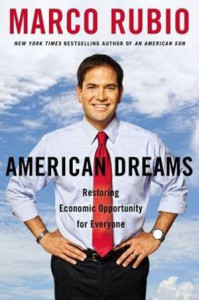 Florida Senator Marco Rubio will be at a West Des Moines bookstore Friday to sign copies of his new book, American Dreams. Rubio, a potential competitor for the GOP’s next presidential nomination, outlines a series of policy proposals in the book to address “structural changes” that he says are preventing Americans from being upwardly mobile.

“They keep reading in the newspaper how well the economy’s doing, but they’re not feeling it in their own lives,” Rubio said today during an interview with Radio Iowa. “Their paychecks are still stagnant. The cost of everything keeps going up and every single day the government seems to be passing a new rule, a new regulation, proposing a new tax that makes their life harder, not easier.”

Rubio’s 208-page book includes a chapter outlining his ideas for reforming the nation’s immigration system. Some Republicans who oppose what they call “amnesty” have been critical of Rubio’s role in crafting an immigration reform bill that passed the U.S. Senate in 2013 and Rubio said he doesn’t know whether the book will change their opinions.

“I imagine for some it will not, but for others, perhaps it will would sense. I don’t know the answer to that, but it’s what I believe,” Rubio told Radio Iowa. “The chapter basically says that we have an issue that we have to deal with. We have immigration laws which we have a right to enforce…but we don’t have the mechanics in place to fully enforce them, so that’s the first step that we have to do is build an enforcement mechanism that works and I believe until we do that, we’re not going to be able to make progress on any other aspects of immigration.”

Rubio offers some other ideas in the book, like increasing the child tax credit and creating a federal block grant or “Flex Fund” as he calls it for each state that would be used to run welfare programs as the states wish. Rubio also suggests the federal government needs to play a role in changing the higher education system by directing more support toward vocational education and technical training because the “four-year-college-route” isn’t for everyone.

“We can’t continue to lose money on student loans to pay for degrees that do not lead to jobs,” Rubio said.

In the book, Rubio outlined a new idea for financing a college education in the book, too. He’d let a future employer pay a future worker’s tuition bill and, in return, the business would get to keep a portion of that worker’s wages for a decade.

Rubio was in Iowa last spring to endorse Joni Ernst before she won the Republican nomination for the U.S. Senate and he returned last fall to campaign with her. Rubio’s not yet decided whether to run for president in 2016.

“I’m not prepared to make an announcement or a decision today, but I can tell you that we’re getting closer to making that decision,” Rubio told Radio Iowa, “and I anticipate that at some point this spring we’ll have a firm decision to make and then look forward to moving in that direction.”

Rubio was elected to the U.S. Senate in 2010. Florida law prohibits Rubio from running for president and for reelection to a second term in the Senate at the same time. The widely discussed moves former Florida Governor Jeb Bush has made for the 2016 presidential race complicate Rubio’s decision, but Rubio has taken steps to hire a prominent fundraiser himself and he’s not only visiting Iowa on his book tour, he’ll stop in other early voting states as well.

“As I’ve said before, if he runs I think he’ll be a very well-funded, credible candidate,” Rubio said. “I don’t believe that his running will have an impact on my ability to run and be successful.”

Rubio will be at the Barnes and Noble on University Avenue in West Des Moines from noon to 2 p.m. this Friday to sign copies of his book. Details are here.