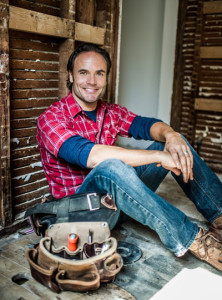 One of television’s Do-It-Yourself house-flipping experts will be in central Iowa this weekend, hoping to inspire snow-weary homeowners to dream about making big improvements to their houses, yards and lives. Matt Blashaw hosts several shows on the DIY and HGTV networks.

The 39-year-old California native is a licensed contractor, Realtor and longtime handyman. “I’m a DIYer, I taught myself how to build,” Blashaw says. “My dad was a homebuilder, I worked in his lumberyard so he gave me some of those skills, but I taught myself everything. My house was a playground. We used to not have hot water for a week at a time because, at 14 years old, I decided I wanted to change my water heater.”

Blashaw is among the guest speakers coming in for this year’s Des Moines Home and Garden Show, which opens Thursday. “I want to bring that same love, that same teaching, to people who really want to learn and want to know what it takes to build a dream back yard,” Blashaw says. “I’m going to give you some tips and tricks that you can go home and do that day, in a weekend, that’s going to give your yard a huge impact.”

One of the shows he hosts is called “Yard Crashers,” where ordinary back yards are transformed in two days into stunning landscapes. While he hangs his hardhat in the land of palm trees and sunshine, Blashaw says Iowans share many of the same challenges and pipe dreams for their living environments. “Everywhere you go, from the different states I’ve been in, the principles are all the same about what to bring into a back yard,” Blashaw says. “Of course, in the colder states, like where you guys are, fire pits are essential, making an outdoor space that you can be in even in the wintertime.”

Blashaw will be speaking on Friday, Saturday and Sunday at the Home and Garden Show at the Iowa Events Center in downtown Des Moines.