You are here: Home / News / At Drake University, Biden focuses on partisan economic debates of past, future (AUDIO) 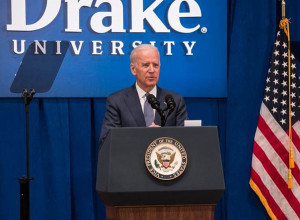 Vice President Joe Biden used a midday speech at Drake University today to rap the economic policies Republicans pursue, saying the real “job creators” in America are engineers and factory line workers who are in the middle class.

“Despite the clear evidence of the past few years, the fundamental economic debate between Democrats and Republicans in this country is not settled,” Biden said. “It goes on and we’re going to need to win it again and again in the days and month ahead.”

Without mentioning Hillary Clinton by name or indicating he planned to run for president himself, Biden also addressed the idea that electing a Democrat in 2016 would be like giving President Obama a “third term.”

“I call it sticking with what works,” Biden said, “and what we ought to do.”

Biden chastised people in his own Democratic Party who’ve tried to “distance themselves” from Obama Administration policies.

Biden did not name any of Republicans who have indicated they’re mulling a bid for the White House in 2016. Instead, Biden dropped names like Mitt Romney and Pat Ryan into his speech and lamented the growing income inequality in America. He called standing up for the middle class the “single challenge of our time” and argued the trickle down economics Republicans advocate is part of the problem.

“It used to be that everyone understood that the ‘job creators’ were the engineers, the scienitsts, the folks working on the line, the folks like my dad who sold the product that was made,” Biden said, “not just the shareholders.”

Biden spoke to over 800 Drake University students and staff, along with a few Iowa Democratic Party leaders, like former Congressman Neal Smith. The vice president spent more than half of his speech reviewing the past six years and briefly touched on the specific proposals President Obama is asking congress to embrace this year. He touted the idea of the federal government providing two years of free community college for “responsible” students.

“What allowed us to lead the world from the late 1890s to today? We’re the first nation in the world to have universal education, free education for 12 years,” Biden said. “Does anybody think that’s enough?”

Biden is due to hold a roundtable discussion with students at Des Moines Area Community College later this afternoon.