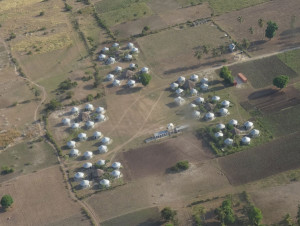 View from above of the Village of Hope in Haiti.

The Global Compassion Network (GCN) in Eagle Grove is celebrating the third anniversary of a project that used an Iowa product to help the people of the earthquake ravaged country of Haiti.

Ken DeYoung is the director of the Haiti effort, which started by turning metal grain bins made in Iowa into homes in Haiti. “The Village of Hope was started with that idea, to replace homes for people who had their dwellings destroyed from the earthquake of 2010. And with the help of many people from Iowa, that project got underway in a big way. And the partnership with Sukup Manufacturing certainly has been a big part of that as well,” DeYoung says.

Sukup Manufacturing’s round metal bins were turned into what are called “Safe T Homes,” and the governor and others got behind the effort and the first part of the project put up 48 of the dwellings in Haiti. TheVillage of Hope now has 60 homes and houses with more than 220 residents.

Grain bins made in Iowa were turned into homes in Haiti.

DeYoung says there are still great needs in Haiti, but a lot of progress has been made. “As we started after the earthquake there were approximately a million-and-a-half people living under a tarp,” according to DeYoung, “and today what I hear is there are still 100,000 people still living in those kinds of conditions. So, the change has been dramatic.”

As the need for housing eased, the GCN expanded its focus to help meet other needs in the country. “Today we’re using these homes to build orphanages, and one of our latest projects is facilities for newborn babies and widows. And all those are Safe T Homes from Sukup,” DeYoung says. GCN has also built homes in Peru and Kenya, and DeYoung says they helps build homes for the recover from Hurricane Sandy. He says they have had to make only minor modifications to the galvanized steel buildings they built out of the bins.

DeYoung says the structures have a life-span of 7 to 8 decades, which is well beyond that of other structures. “In fact I got a phone call this week from a group that had been involved in temporary housing and all of those have disappeared and haven’t stood the test of the tropical climate,” DeYoung says. “This thing being built like it is, designed like it is, is a strong structure. So, it’s a great fit, not only Haiti, but other parts of the world too.”

DeYoung co-founded the GCN and says it is hard to believe it has been three years since they undertook the Haiti project. He says it is something that has made a great impact on him and others. “It’s a life changer without a doubt. Its’ given me, given us, our family a purpose beyond ourselves to get up in the morning and go plant another crop of corn or soybeans. To realize that you can have such a dramatic direct impact on other people’s lives,” DeYoung says.

It’s that impact on others that is the driving force behind him and the others who volunteer to help with the projects in Haiti and other countries. “To know that the 110 or 15 kids that we have in orphanages down there today — many of them would not be alive if it wasn’t for the support of people in Iowa and the midwest, it’s a life-changer,” DeYoung says. “As we grow in this and our ministry expands, we stay focused on the idea that we as Christians, as believers, have a responsibility to care for those in need.”

DeYoung says the public focus on Haiti has gotten less as time goes on and other things take over the attention of everyone, but he says the need is still there and their work will continue. He says they are always in need of donations to continue the effort and you can support the Global Compassion Network online at: www.globalcn.us/donate or by sending a check to P.O. Box 193, Eagle Grove, Iowa 50533.

Photos and video provided by the Global Compassion Network.