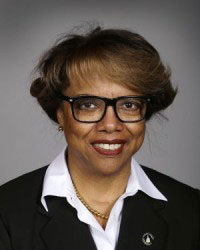 An African-American who serves in the Iowa House says she believes plans are coming together for a statewide “equal justice summit” to be held early this fall. African-Americans make up just over three percent of Iowa’s population, but nearly 10 percent of African-American men in Iowa are either in prison or have a criminal record.

Representative Helen Miller, a Democrat from Fort Dodge, plans to host the summit to call attention to that statistic. “I spoke with Chief Justice Cady on Monday and he told me he agrees it’s one of the biggest issues that we face here in the state of Iowa is the lack of awareness that this is an issue because minorities are such a small number,” Miller says. “And equal justice is really an issue for Iowans in general.” Miller met with the governor and lieutenant governor last week and she says they’re also supporting her effort.

“There’s a recognition that Iowa can and perhaps should be a leader in this effort and my goal is to attempt to make that happen,” Miller says. Miller, who is an attorney, says the issue is “ripe” for discussion given what’s happening across the country.

Miller and the handful of other African-American members of the Iowa House are filing a series of bills they hope will be considered in the legislature this spring, including one which focuses on “deescalation training” of law enforcement.