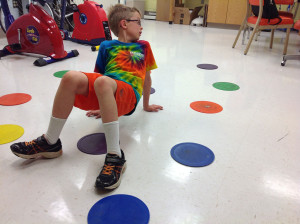 Activities that make kids think and move at the same time, like crab walking while solving math problems, can improve cognitive ability in children, according to a study by Iowa State University kinesiology professors.

Researchers at Iowa State University are finding physical activity is a boon to the brains of elementary school students.

“We always have the traditional perception that kids need to sit down to learn or they need to stand still to learn better and that is not accurate,” Vazou says. A group of children around 10 years old took part in a study conducted by Vazou and associate professor Ann Smiley-Oyen.

The kids were given a test measuring cognitive function while sitting at a table. They then were asked to do physical activities like crab walking or skipping around obstacles – while they answered math problems. When they stopped the activity to do the test again, they performed better than they had while simply sitting. Vazou says it’s important that the activities are not too physically demanding.

“So, as long as the intensity is moderate, they benefit during exercise and they benefit even more right after (the exercise) because they can absorb the information even better,” Vazou says. Many other studies have found longer bouts of aerobic activity can improve cognition in children, but Vazou says the research at ISU suggests even short periods of activity can improve a child’s working memory, self-control, and focus.

Vazou hopes parents and teachers take notice of the study’s findings. “We shouldn’t suppress the desire of children to move, we should encourage them to move, because that is how their brain will function better,” Vazou says. The research at ISU also found that overweight and obese children showed even more cognition improvement after physical activity than their peers.