You are here: Home / News / Temperatures going up, but will come back down 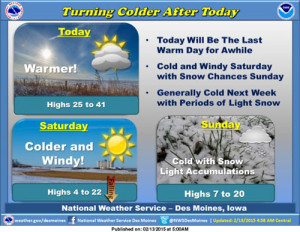 Some very cold conditions will return to the state this weekend, according to National Weather Service meteorologist Brad Fillbach.

“We’re looking at temperatures 15 to 20 degrees below the normal,” Fillbach says. While highs will climb to near 40 in some parts of the state today, temperatures will plummet tonight – with lows near zero in northern Iowa to the low 20s in the south.

Those cold temperatures will hang on through the day tomorrow with blustery winds. “We’ll have north winds of 15 to 25 miles per hour, gusting up to 35, so in addition to the cold temperatures, we’re going to have wind chills making it even colder,” Fillbach says. Low temperatures Saturday night into Sunday will dip into the single-digits-below-zero over much of the state and there’s a chance for snow. Fillbach says any snow that falls on Sunday will be “fairly minimal.”

Slightly warmer conditions may return on Monday, but it should remain cold much of next week. “Probably, for much of next week, we’re looking at highs generally in the single digits and teens,” Fillbach says. “It will be warming up by the end of the week. We could see highs in the mid-20s by Thursday.”