You are here: Home / Crime / Courts / Governor open to working with other states to make cannabis oil more available 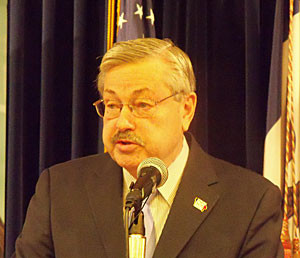 Governor Terry Branstad says he is open to looking at changes in the state law that would make it easier for parents of to get ahold of cannabis oil used to treat sick children.

The people who pushed for the law allowing them to possess the oil in Iowa, say it is too tough to get and bring in from other states and they would like to see Iowa manufacture the marijuana oil here.

“There might be a possibility that we could work something out with a neighboring state in dealing with this, but I want to be careful that we avoid unintended consequences,” Branstad says. “…We want this to be available for the children with epilepsy that it could help, but we also don’t want it to get into the hands of other people who are not authorized to have it.”

Branstad says approving the manufacture of marijuana brings a whole lot of things with it. He says the governor of Colorado has said there are a lot of unintended consequences and he wished the legalization of medical marijuana hadn’t happened in his state, “When you get into the manufacture and distribution, which they are now doing in his state, there are a lot of issues that they really weren’t prepared for.”

Branstad says Iowa could possible work something out with Illinois, which passed a law which allows for the production of medical marijuana. He says Illinois is still working through the process.

“There is a firm in the Quad Cities that is intending to bid on this, so I guess we have to see what happens there. Obviously the Quad Cities is right across the river from Iowa, so I thought if Governor (Bruce) Ruaner approves this and they go forward with this, maybe that is a possibility of something we could do,” according to Branstad. Branstad says the state has to be cautious in whatever changes are made to the law.

“And again, as I said, this is an area that I think we need to be very thoughtful and very careful about. We want to do what we can to try to help the families, but we don’t want to create a lot of unintended consequences like what they are facing in Colorado,” Branstad says. Branstad says he’s not sure if anything will get done in this session, but says the possibility is there to work with a neighboring state.