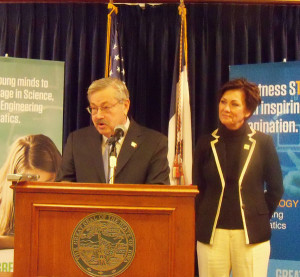 Governor Terry Branstad says he’s not ready to take a stand on raising the speed limit to 75 miles-an-hour on rural interstate highways. “I want to look at the impact that would have on public safety and fatalities on our roads,” Branstad says.

Seven Republican Senators have introduced a bill that would raise the limit on some stretches of roadway above the current 70 miles-an-hour maximum. “I know a number of western states have done that, but I would want to get more information before making a decision on that,” Governor Branstad says.

The Republican governor also says he is waiting to see any final legislation before determining if he would sign off on reducing the penalties for possession of marijuana. A bill to reduce the sentences of first-time offenders for possessing trace amounts of marijuana is working its way through the Senate and supporters say it would help address racial disparities in Iowa’s prison system.

Branstad, a Republican, says he wants to see the final legislation, and says it’s one part of the effort to deal with the racial disparity issue. “We have been working with the African-American community to address the concern about the disproportionate number of African-Americans who are in the corrections system,” Branstad says. “I think our parole board has made great progress also in reducing the disparity and we have been able to increase paroles at the same time reduce recidivism. So, I am really encouraged about the collaboration between the parole board and corrections in addressing this issue.”

Branstad made his comments at his weekly meeting with reporters.