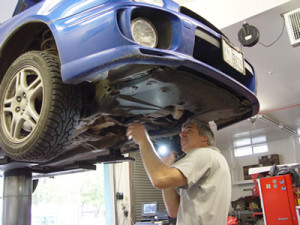 The freeze-thaw cycle we’re in is making some monster potholes in Iowa’s streets. The road craters can ruin tires and rims, damage suspension and alignment and they can even knock the exhaust system off your vehicle.

Ann Avery, a spokeswoman for State Farm Insurance in Iowa, says if there’s a lot of damage from a pothole, you may be able to file a claim.

“The damage done to your car would generally be covered under the collision portion of your insurance,” Avery says. “These kinds of repairs from damage caused by a pothole can cost on average anywhere from $300 to $700. My best advice would be, if you have questions about the damage and whether it would be covered, consult your insurance professional and find out what your coverage is in this circumstance.”

Avery says you can’t prevent potholes but you can help protect your vehicle by driving carefully. “One suggestion would be taking roads that you know well because that familiarity can help you avoid the potholes,” she says. “Another thought would be when driving at night, travel on well-lit roads so you can see the surface and see them coming a little bit better.” If you spot a chuckhole, Avery says to break before impact, as there’s less damage when the tire is rolling, rather than skidding over a hole during breaking.

She offers another tip: “Slow down, give yourself a chance to see the pothole and that way you can avoid it before you’re in it,” she says. “If you do hit a pothole, carefully inspect your tires and your wheels for possible damage. Think about how your car is handling, if it’s pulling one way or the other, if the steering feels wobbly, you might want to have your car checked by a professional.” She reminds, always check with your agent first to see what is — and what is not — covered.