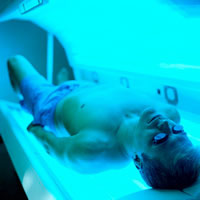 A bill that would ban teenagers from commercial tanning bed businesses has cleared a committee in the Iowa House. About 100 volunteers from the American Cancer Society were at the statehouse today as a show of support for the bill.

Gail Orcutt of Pleasant Hill, a lung cancer survivor, has a cousin who died of skin cancer two years ago. “Kids can’t go in and buy cigarettes and certainly they can’t smoke cigarettes before they’re 18,” Orcutt says, “so we need to keep our kids safe and a lot of parents just don’t know how dangerous tanning is.”

According to the Centers for Disease Control, indoor tanning can cause skin cancer. Eleven other states, including Minnesota and Illinois, have passed legislation banning indoor tanning for minors.

A 2011 study found one-third of the girls who were high school seniors had used a tanning bed that year. While the bill banning teens from tanning beds in Iowa cleared the House Human Resources Committee, it wasn’t unanimous. Some Republicans on the panel objected, arguing it should be the parent who decides whether their 16 or 17 year old can tan.