You are here: Home / Business / Groups rally at the statehouse for an increase in the minimum wage 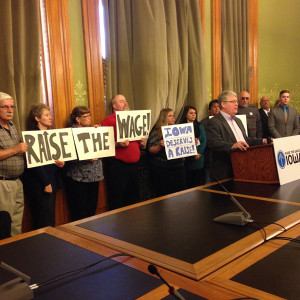 A subcommittee in the Iowa Senate has signed off on the idea of raising the state minimum wage to $8 an hour on July 1st, and then to $8.75 on July 1st of 2016. Senate Democratic Leader Mike Gronstal of Council Bluffs plans to bring the bill up for a vote in the full Senate. “We’re going to pass that legislation over to the House,” Gronstal says. “We’ve attempted to come up with a bill that’s kind of middle ground, not what they’re talking about at the federal level, so we think it should get bipartisan support and we think it’s time that 250,000 Iowans who’ve seen nothing from the recovery get a piece of the recovery.”

The top Republican in the Iowa House says House members will consider the bill if it clears the senate, but it is not a priority for Republicans. House Speaker Kraig Paulsen says he and his fellow Republicans are focused on ensuring Iowa’s economy is growing and Iowans can earn a wage that will support a family, something he says the minimum wage hike Democrats propose won’t do.