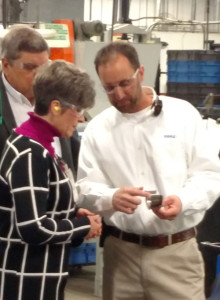 Senator Joni Ernst during a tour of the Mahle Engine Components plant in Atlantic.

U.S. Senator Joni Ernst, a Republican from Red Oak stopped in Atlantic this morning, as part of her 99-county tour of the state.

Ernst toured Mahle Engine Components U.S.A. Incorporated as part of the stop. She also answered questions on a variety of issues, including how she’d like to see the threat posed by ISIS handled and the role of the U.S. in the fight.

“What I would like to see is encouragement of those countries that are in the region stepping up and contributing to this battle against ISIS. So, we would like to see more action from the Egyptians, from the Jordanians, from the Turks, we would love to seem them engaging in this,” Ernst says. She says there may come a time when there needs to be a serious discussion of using American ground forces, but until then she says she’d like to see the countries in the region “step up their ground game.”

Ernst expressed her concerns about the continued deadlock in the Republican-controlled Senate over the funding for the U.S. Department of Homeland Security. She says Senate Democrats refuse to cooperate in getting the bill through Congress. “We have offered to bring the bill up and they certainly can put amendments or attempt to put amendments on the bill — which is the normal course of action — but they are refusing to do that,” Ernst says. “So, unfortunately we don’t know how this is going to end. I would like to see Homeland Security funded by the end of the month.”

She was also asked about the FCC taking control of the internet. Ernst said the government should not be the sole source of control over what is seen and heard on the ‘net. Ernst says, “It seems that whenever the federal government gets involved with something it just seems to go much worse, so I would much rather see that the internet and private industry is taking care of its own business. We don’t want to restrict ingenuity, we don’t want to see the federal government trying to run the internet.”

Ernst’s visit in Atlantic was the first stop of the day. Ernst’s other stops include Quality Machine in Audubon, and the Guthrie County Hospital. She also was scheduled to attend a meeting of the Greene County Development Corporation, in Jefferson. Her tour continues Wednesday, in Carroll and Thursday, in Denison.