You are here: Home / News / Newest member of Iowa House of Representatives sworn in 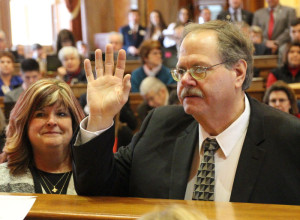 The 100th member of the Iowa House has been sworn in and has started voting on committees.

State Representative David Sieck, a Republican from Glenwood, was chosen in a special election on February 10. He won 73 percent of the vote in his race against Democrat Steve Adams of Red Oak.

“First of all I was humbled by the fact the people of my district elected me ’cause I’d worked pretty hard to try and win it and I was humbled by that fact. I think when it sinks in, it’s a pretty big deal,” Sieck told Radio Iowa. “I was excited, too, to come up here and work.”

The results of the special election were certified Monday and Sieck, who is 57, took the oath of office yesterday.

Sieck is serving on the Education, Environmental Protection, Human Resources and Public Safety Committees. He’s also been named the vice chair of the subcommittee that oversees state budget plans for administrative agencies in state government, including the state auditor and the Racing and Gaming Commission.

Sieck has spent his entire life and southwest Iowa. He spent his early years in Council Bluffs, but the family moved to Glenwood in 1962, when he was five years old. Sieck and his brother manage their family’s fourth-generation farm, which sits along the Missouri River.

“I’ve dealt with river issues most of my life and worked really hard on that and then that led us on other paths,” Sieck said. Sieck is a past-president of the Iowa Corn Growers and has been active in the National Corn Growers Association as well as the U.S. Grains Council. In 2008 the Secretary of the Army appointed him to the Missouri River Recovery Implementation Committee.

“In 2011, our levee system, which I helped my grandfather in the late ’60s and early ’70s get the farmers to sign up to build the levees and that protected us,” Sieck said. “Now some of the levees didn’t hold but our did, so we had seep water and, you know, 110 days of water up against the levee made us lose our crops, but…we didn’t get the sand on the dry side of the levees like a lot of people got.”

Sieck attended Iowa Western Community College in Council Bluffs and Iowa State University, but his father convinced him to return to the farm after two years’ worth of classes. Sieck said farming has given him a “good background” for being a legislator.

“I think it’s led me into a lot of other things that have helped with this,” Sieck said. “I have spent a lot of time up here, outside of the doors, trying to get things done, so I am familiar with that process, but this process is a completely unique process to that…I am pretty green at this process, but hopefully with the skills I’ll learn it really fast.”

The Sieck family farm operation extends into two other states, as they farm ground near Maryville, Missouri, and they bought a farm in Kansas, but hire someone in that area to farm it.