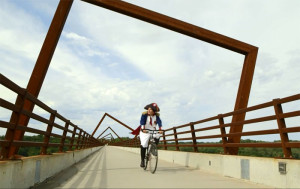 The Iowa Tourism Office is going back in time hoping to generate some future business. Tourism Office spokesperson, Jessica O’Riley explains the premise of the annual marketing campaign.

“For out television and our digital ads we are featuring Napoleon Bonaparte, who made the tragic mistake of selling Iowa as part of the Louisiana Purchase back in 1803,” O’Riley explains. “He has come back to experience what he gave up, and after visiting he realizes he made a huge mistake.”

Travelers meeting Napoleon great him with the campaign’s theme: “This is Iowa” and a sullen Napolen replies “Yup.” O’Riley says they are hoping the leader know for his small stature will help them by “trying to cut through all the clutter of the travel ads and make a memorable impression about Iowa.”

O’Riley says the tourism campaign will spend $1.5 million and focus on key cities outside the state. “We are strategically located next to various metros, Kansas City, Omaha, Chicago, Minneapolis/St. Paul. We are an easy trip for them to get to us, so we are saying ‘come on over and experience what we’ve got’,” according to O’Riley. She says a survey of those asking for Iowa tourism information found 55 percent of the requests came from out-of-state.

“Tourism expenditures topped $7.7 billion for 2013 — which is the most recent year we have figures for. It makes a huge impact on the state, that’s more than $32 million in state tax dollars generated — especially the ones from out-of-state — they leave their tax dollars, but don’t draw down any services,” O’Riley says. They are also hoping to get visitors involved using #thisisiowa.

“We are encouraging travelers as they’re visiting our state to take photos and if they are posting them on Instragram, or Facebook or Twitter or Vine videos to hashtag those, ‘this is Iowa’. And we had a whole hashtag gallery set up where they can view those,” O’Riley says. “Its’ a great resource for inspiration about travel in Iowa.”
Images and video courtesy of the Iowa Tourism Office.