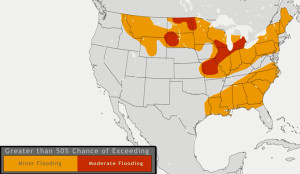 The National Weather Service has issued its first flood prediction for the spring.

Senior Hydrologist Jeff Zogg says there’s not much to raise concern at this point. “Obviously we have a lot more winter to go through yet before we reach the springtime season,” Zogg says, “but based on what we’re seeing right now, the spring flood outlook for most of Iowa calls for a near normal risk of flooding at most locations.”

He says the lower Raccoon River area and the Des Moines River area below the Raccoon have a slightly higher flood risk. Zogg says several factors go into the flood forecast. “The snowpack itself, how deep it is, the soil moisture, frost depth, stream levels, those sort of things. We have a couple of factors that tend to increase the risk and a couple tending to decrease the risk, so overall you add everything up and the overall risk is near normal for this time of year,” Zogg explains.

One of the unknown factors is how quickly the snow will melt “And obviously the timing of any kind of rainfall as well as the warm temperatures, that will have a big impact on the potential for flooding,” Zogg says. “We have noticed over the past several years there has been a tendency for our springs to be quite wet across the state of Iowa. So, if that happens again this year the timing will be everything — because for example if the ground is still frozen there we’ll have more runoff — and we’ll have to continue monitoring to see when those rains do arrive if they do.”

If the frost doesn’t cause runoff then the amount of water that can be absorbed into the ground becomes and issue. And the groundwater levels could also be a problem this spring. “Those levels are actually above to much above normal across the state just because of the wet fall we had,” Zogg says. As he has pointed out, a lot can change in the next several weeks. There will be an updated report on the flood outlook in early March.