You are here: Home / Fires/Accidents/Disasters / Annual ‘Day of Service and Giving’ set to remember Aaron Eilerts 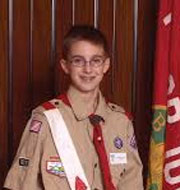 Tuesday will mark the annual Day of Service and Giving in Iowa in honor of Aaron Eilerts of Eagle Grove. Eilerts was among four Boy Scouts who were killed when a tornado hit their camp in western Iowa’s Harrison County in June of 2008.

Scott Jeske is the principal of Robert Blue Middle School, where Eilerts was a student and where a whole list of activities is planned for tomorrow.

“Basically, the entire day will be given to helping and serving others and understanding the importance of serving others,” Jeske says. “We’re going to be showing a movie, ‘The Ultimate Life,’ we’re going to be talking about legacy, but the big things that we do are the projects that are going to help people in our community, people really throughout the world.”

The annual observance of the Aaron Eilerts Day of Service and Giving was first declared a statewide event by then-Governor Culver in 2009. “If our kids could understand how important it is to give back and how much they will gain from that,” Jeske says, “we feel like we’re really doing a service to them and to our community.”

Students will be involved with a host of projects, including: pumping gas and cleaning windshields at local service stations, building a new wooden game for the school playground, and making dolls for orphanages in Haiti. “We have a number of people coming in and volunteering to help our kids sew pillowcases that will go to hospitals and people around the area that might need an uptick in their lives,” Jeske says. “We’re doing the blankets for the animal shelters again.”

Tomorrow would have been Eilerts’ 21st birthday.