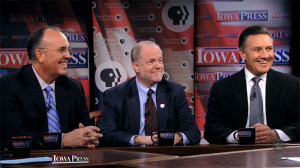 The leaders of Iowa’s private colleges and universities say the stability of the state’s higher education “ecosystem” is threatened by the proposed “performance-based” funding formula for the three state-supported universities.

Mark Putnam, the president of Central College in Pella, says rewarding the state universities with more tax dollars if they enroll more Iowa high school graduates is “perilous” not only for private colleges, but the public universities as well.

“Instability is not a friend to students’ education or research, so changes that occur abruptly can be incredibly disruptive and it creates behavior patterns that are not healthy for institutions,” he says. “So if institutions begin to look at: ‘How can I take students from the others?’ or ‘How can I start to position myself to win?’…then it becomes something that’s not helpful.”

Grand View president Kent Henning says even though legislators haven’t approved the plan yet, the University of Iowa is already reacting. “It’s now financial aid season and we are getting reports of students receiving very generous financial aid packages from the University of Iowa, almost free rides,” he says. “And while that’s wonderful for those students…I think the state’s taxpayers should be wondering and asking: ‘What’s going on? How is that possible?’ if the state universities keep coming back to the legislature pleading poverty.”

University of Dubuque president Jeffrey Bullock says it is “ludicrous” for the public universities, especially the University of Iowa, to start adjusting enrollment policy to more strongly favor in-state rather than out-of-state students. “Right now over 90 percent of the college-going population of this state stays in the state anyway,” Bullock says. “Why would we want to erect a wall…that effectively keeps potential not just students out — higher net paying students, by the way — but also future employees that help grow the economy and fill the gap, the employment gap that we all know exists in this state?”

The three private college presidents discussed the issue during a joint appearance on Iowa Public Television’s “Iowa Press” program this past weekend. Gary Steinke, the executive director of the Iowa Association of Independent Colleges and Universities, says “every other state” that has tied state tax dollar support to in-state student enrollment has abandoned the effort.

“Tennessee was the first to try it in 2009 and it doesn’t work and they don’t do it any more. They have taken the enrollment weighting out of their performance-based funding plan and so so has Indiana and so has Virginia and so has Maine,” Steinke says. “I mean, they don’t use it any more because it doesn’t work.” Steinke says the proposal has sparked a “sector war” in Iowa’s high education community — for an idea that research shows ultimately makes no improvement in student performance.

The Board of Regents — the nine-member panel that governs the University of Iowa, Iowa State University and the University of Northern Iowa — has proposed a change in the formula that distributes state tax dollars to the three public universities. Regents officials say it’s designed, in large part, to reward UNI which has gotten the smallest share of state support in the past and where over 90 percent of students are Iowa residents. The loser in the change would be the University of Iowa, where nearly half of the students come from out-of-state.