You are here: Home / News / Reynolds to ‘connect the dots’ with tour to highlight Iowa’s women leaders 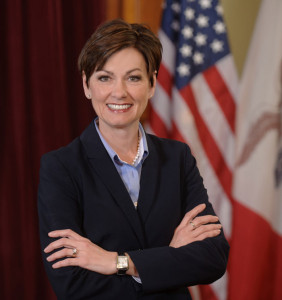 Lieutenant Governor Kim Reynolds is going on a statewide tour in March to highlight how women are “positively impacting Iowa,” with the goal of setting up new “networks” of women who will mentor other women.

“The movement is important for Iowa’s economic vitality and now more than ever we have an opportunity to continue our unparalleled growth by unlocking the potential of all of our talents,” Reynolds says. “And this is particularly true for women-owned business leaders, women for leadership, women on corporate boards and women in elected office.”

Reynolds, however, says this tour is not the first step of her own 2018 campaign for governor.

Reynolds was first elected as lieutenant governor in 2010 and won reelection as Governor Terry Branstad’s running mate in 2014. Reynolds says she travels with Branstad often, but has pursued other projects on her own, like boosting science, technology, math and education and leading international trade missions. The lieutenant governor’s tour in March coincides with National Women’s History Month and Reynolds says she hopes to “connect the dots” with women leaders all across the state who have “incredible talent.”

“When we get into a discussion it is not unlikely before we end the discussion that I end up saying: ‘Have you ever considered running for office? We need individuals like you that are engaged and inspired and have a passion to make a difference.'”

The lieutenant governor plans to highlight the stories of successful women she meets on the tour by tweeting about it. Her posts on Twitter will be under the hashtag #KimTours99.